﻿ MSSIAH Cartridge - MIDI Hardware and Software for the Commodore 64! 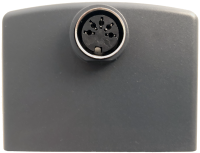 All in one USB save/load device and mouse/joystick converter.
Full 1541 disk drive emulation.

(Separate product. Not inluded with the Cartridge)

is a plug and play cartridge for the C64/C128/SX64 that plugs into the expansion port. It contains five music applications and an integrated MIDI interface. The applications are:

is the flagship application in the MSSIAH suite.
Whether you want a multi-timbral MIDI synthesizer or create multi part music directly on your C64, MSSIAH Sequencer is the tool for you. 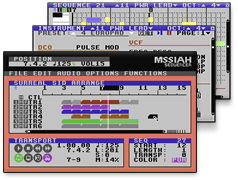 The user interface mimics the likes of its contemporary older brothers such as Logic, ProTools and Cubase. This makes the MSSIAH Sequencer a one-of-its-kind application on the C64 platform.
Add, move, copy and delete sequences or notes with just a click on the mouse. Or why not input your latest idea by playing the keys on your C64 or MIDI keyboard?

You have 32 SID instruments to edit and play and can choose from 68 readily available presets to quickly access THE classic computer game sounds of the 80s.

The user interface of the MSSIAH Sequencer is fully graphical and supports 1351 mouse (recommended), joystick and Amiga/Atari mice. A modern USB mouse can be used when hooked up with Savyour.

Switch the MSSIAH Sequencer to MIDI mode and you now have a 6 track multi-timbral C64 synthesizer ready to play next to your MIDI synthesizers.
Polyphonic mode is also available as a stand-alone MIDI mode with up to six voices and optionally both modes can be combined.

In poly mode you can choose to treat the wave-table sounds like arpeggios. So as you play chords on your MIDI keyboard they play back as classic broken wave-table chords.


MSSIAH Sequencer provides full MIDI control of all sound parameters via control change messages. Also supported are pitch wheel, program changes and note velocity messages.
With all these features you can rely on the MSSIAH Sequencer as either a versatile C64 MIDI module or a fun internal music app to create your own SID music quickly and easily.

is a monophonic lead synthesizer application.
Two oscillators are stacked for a thicker sound and all of the computer's power is concentrated to a single mono voice. Think Moog or SCI Pro-One and you get the idea behind this program. When switched to MIDI mode you can hammer away at your MIDI keyboard and feel like any mad 1970s keyboard virtuoso..

Mono Synthesizer accepts MIDI notes, velocity, pitch wheel, program changes and control change messages to control all the available sound parameters.
In case you are one of those with a desperate need to use your C64 as a keytar you can select to use the upper part of the C64 keyboard instead of MIDI inputs for the notes alone. The keys used are fully compatible with the "Music Maker" keyboard overlay if you happen to have one of those lying around the house.

For internal use, the Mono Synthesizer features a TB-303 style step sequencer to provide interesting patterns, even with the help of the "Advanced Random Composer" - lock your notes and MSSIAH Mono Synthesizer creates the melodies for you! It's hard to find a better tool for quickly getting your inspiration going.
The step sequencer responds to both an internal clock or external MIDI clock.

You tweak your sounds from any of the available 8 patches on screen much like an old vintage synthesizer. All parameters have assigned keys for fast access and "knobs" that you turn with either joystick or game paddles (potentiometers).
A virtual knob on screen follows the active parameter and gives you a quick visual display of its current value.

is designed for the SID 8580 R5 as a scaled down version of the Mono Synthesizer with more of a TB-303 approach.
Accents are applied so that the C64 makes "wows" and "wopps". Depending on current envelope, accent and resonance settings the accent effect differs, just like on the real thing.
The result is a sound that is more acid than ever heard before on a Commodore computer!

If you don't have a TB-303 or just want to add something different to your setup, the MSSIAH Bassline will become a great asset helping you to turn the dance floor upside down.

The SID sound circuit (8580 recommended) does its best to copy the 303's behavior and though it sounds like a weird crossing between a 303 and a SID, sometimes it does come really close to the real thing.

is a drum machine application with a 909-style user interface/sequencer. However, that's where the similarities with the 909 stops..
Drummer brings back the computer game drums from the 80s. Forget sampling and regular drum synthesis.

MSSIAH Drummer uses a classic technique known as wave tables to create genuine retro C64 drums.
By rapidly changing frequencies and waveforms the timbres of a drum are put together and shapes the unique sound that really does not sound like anything else.
On top of that you can use the SID filter to further shape the drum sounds or put a sweeping LFO effect on it.

The application has a total of eight instruments where the slot for bassdrum and snaredrum each have eight selectable sounds so that you can build the kit of your choice.

All parameter 'knobs' have assigned keys for quick access and you use either joystick or potentiometer to tweak it. 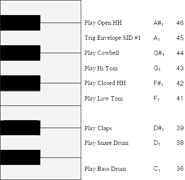 No mystery knowledge of C64 wave tables is needed to master the MSSIAH Drummer. Just start it up and adjust the sounds to how you want them with some good old knob-tweaking.

You play the drums on the C64's keyboard or switch the application to full MIDI mode where a MIDI keymap triggers each instrument respectively.
Also, Drummer responds to MIDI velocity and every parameter has its own control change number.

If you run the Drummer application on a standard C64, you have three voices of drum polyphony. Add an additional SID audio circuit (SID2SID) and Drummer extends its polyphony to six voices fully assignable to each drum sound ("Voice map").

Adding SID drum flavor to your drum track has never been easier, more creative and more fun than with the MSSIAH Drummer.

is a sample player with full MIDI control.
Not only does this make it quite unique for the C64 platform, it has also got features that makes it a useful sample player that very well might be your best lo-fi drum machine companion!

Sample playback is fixed at 4-bit, 6 Khz on three virtual channels. Each channel output may be routed to either SID #1 or SID #2 (with the SID2SID).
The memory holds up to 5,5 seconds of samples.

The sounds can be individually level adjusted or respond to velocity and assigned to a fixed MIDI keymap.

Loading samples into the C64 is easy. Wave-Player accepts both simple MIDI sample transfers from your Mac/PC audio application and raw Windows wave-files on your floppy disk (or USB memory using a Savyour).
As an extra bonus, the MSSIAH cartridge is loaded with 130 preset demo samples that you can instantly load into the Wave-Player.

is a USB save/load device, disk drive emulator and mouse/joystick interface all in one. It allows you to use modern USB devices with your old Commodore computer.

Savyour targets MSSIAH users, retro gamers and 8-bit enthusiasts who want to use modern peripherals with their beloved Commodores. 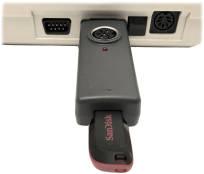 is needed to use Savyour as a disk drive. It is not included but can be purchased in a separate package.
The cable is 6 pin DIN, 0.5 meters (19.5") male to male and connects between Savyour and the C64's serial port.
Shape and colour may vary.
If you happen to have a serial cable for an old 1541 disk drive it can be used instead as they are fully compatible. 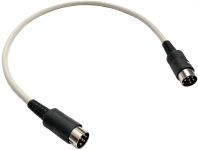 is a 1.6 x 2.4 inch manufactured circuit board that offers a cheap and neat solution if you wish to add a second audio chip to your Commodore 64. All you need is some components and a soldering iron.

With a second SID (C64 audio circuit) in your computer you get the following advantages with the MSSIAH Cartridge:

Assembling the circuit board is simple if you have basic soldering skills. The installation guide shows the whole process with pictures and explanations.

The SID2SID is designed to fit into all Commodore 64 motherboards including the Commodore 128.

Components and SIDs are not included.

SID2SID Installation
Guide
Back to top